Topics covered in “Sterling Heights” includes the City’s population boom between 1960 and 1970, commerce and industry The book details jewels of the City, including the growth of lush parks, the Clinton River, Sterlingfest and much more.

Copies of “Sterling Heights” are available for sale at the Sterling Heights Library for $20. The book can also be ordered online by going to Arcadia Publishing’s website. 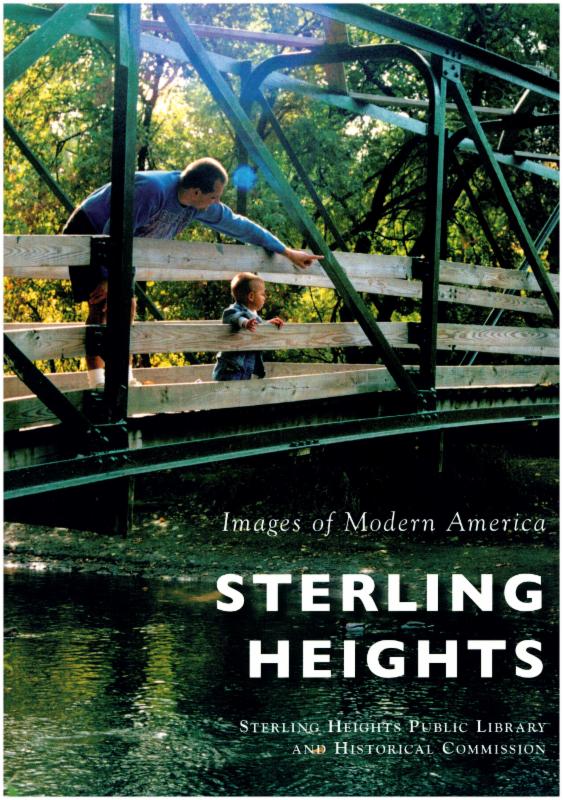 The book contains more than 150 photographs from the library’s archives. Librarian Debra Vercellone chose the photographs used in the book and wrote the captions. Historical Commissioner Wallace Doebler helped authenticate the photos and wrote the book’s introduction. 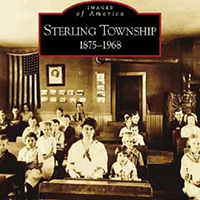 Sterling Township, located about 18 miles northeast of Detroit, was first settled after the Erie Canal was opened. The rich soil, relatively flat land, and the vital Clinton River attracted pioneer and immigrant families who arrived to establish farmsteads. The first influx of immigrants came mainly from the British Isles, and by the 1870s, German families had flocked to the area, raising dairy cattle and establishing farms. Belgians, arriving in the early 1900s, developed truck farming - growing fruits and vegetables to sell every week at the farmers’ market in Detroit.

Farm culture prevailed until the 1950s, when large industrial plants began moving in, bringing with them workers and a need for housing and City services. Sterling Township became the City of Sterling Heights in 1968, and this collection of photographs showcases the families and the way of life in the early days of this community, a historic community that is now the fourth largest City in Michigan.

Collaborator Debra Vercellone is a retired librarian from the Sterling Heights Public Library. A lifelong resident of the Sterling Heights area, she has had a keen interest in local history since childhood, when her father pointed out an abandoned 1-room schoolhouse. She has degrees in history and in library science from the University of Michigan.

Wallace Doebler’s family has deep roots in Sterling Township. Doebler has been very active in civic and business affairs, serving on the Sterling Heights Historical Commission for many years. He has written three books on local history that are available in the library. He passed away in June 2021.

In 1985, Sterling Heights Public Library began an oral history project that would capture the memories of the aging citizens of the Sterling Heights community. Dramatic changes in this fast growing City made the recording of the community's history a priority. A few years later, 100 interviews had been conducted, and seventy interviews had been transcribed and bound. In this book, 29 select interviews comprise the history of the Sterling Township farmers in 25 categories.

Sterling Heights had leapt from the rural Sterling Township of the 1940s with only a few thousand people to the bustling City of Sterling Heights in 1968. Reaching a population of 117, 810 in 1990, changes impacting lifestyles and values are little short of phenomenal. The pages of this book offer the reader a view of a fading rural American lifestyle by those who lived it. If not immigrants themselves, most were descendents of immigrants. Their stories reflect the influence and importance of the immigrant lifestyle for generations to come.

This book is available in the reference collection at the Sterling Heights Public Library. 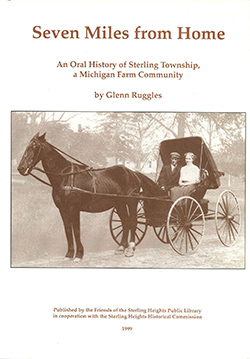 Glenn Ruggles is a 1948 graduate of Elk Rapids Rural Agricultural High School and holds a Masters Degree in history from the University of Detroit. He has been recording oral histories throughout Michigan for more than thirty years. A retired history teacher from Walled Lake Central High School, he has authored 5 previous books on oral and local history in Michigan. In 1985, he was appointed Project Director for the Sterling Heights Public Library's Oral History Project. He is the recipient of the Historical Society of Michigan's Award of Merit (1976) for the 16mm motion picture of the Grand Traverse region, The River's the Same, which he co-produced with Bob Humitz. He is the recipient of the Ferris Lewis Award for Excellence in Teaching Michigan History (1991). In 1997, he received a First Place Award from the Michigan Press Association for his weekly column in the Elk Rapids Town Meeting. Today he lives with his wife, Margee, in Oakland County.
Trash & recycling
Pick up dates & holiday delays
make a payment
Pay bills online with e-pay
Sign up for Enews
Stay up to date
Submit a request
Easily report an issue
/QuickLinks.aspx
/QuickLinks.aspx